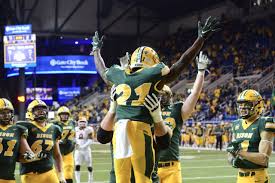 It’s been awhile since the Bison football team has had to play coming off of a loss, but that’s exactly what they had to do this weekend against Missouri State. They handled themselves pretty well despite the lack of experience in the situation. The Herd won in dominate fashion, 25-0.

All of the scoring action happened in the first half. The Herd’s first score came with 1:49 to go in the first quarter. After a big running touchdown was called back by a penalty, the Bison calmly worked their way down the field. The score came on a 7-yard pass from Zeb Noland to Noah Gindorff.

The second touchdown came with 6 minutes left in the half. Jalen Bussey broke out on just the fourth play of the drive for a big 53-yard run. James Kaczor followed that up with a successful run for the 2-point conversion.

With a minute and a half left in the quarter, NDSU would score again. This time they settled for three from a Jake Reinholz field goal. The Bison weren not ready to head into to the lockers for halftime yet. The defense stopped Missouri four and out putting the ball back in the offenses hand.

On the second play, with only 8 seconds before halftime, Noland tossed it deep to Braylon Henderson. The stellar connection lead to 81-yard touchdown pass to cap off the half.

There would be no scoring in the second half, but the Bison would continue to dominate in the other parts of the field.

The special teams were a huge factor throughout the game. Early in the second, defensive end, Braydon Thomas blocked a 42-yard Missouri field-goal attempt. Punter, Garrett Wagner, averaged 52.2 yards over five punts. Wagner also ran a 23 yard fake punt run for a first down. The accolades earned him his third career MVFC Special Teams Player of the Week.

As a unit the punt team held Missouri to under 10 return yards.

The defense came in huge for the Bison. The defense held Missouri for just 63-yards rushing. The Bison ended the game with seven sacks. It lead to a 41 total yards lost for Missouri. Spencer Waege led NDSU, accounted for three of the sacks.

Against the Bison defense, Missouri was only able to convert 25% of 3rd down conversions. Missouri was kept out of the red zone for the entirety of the game. James Kaczor led the Herd with 7 total tackles.

As for offensive stats, NDSU totaled 407 yards. It was a ground and pound game though. The Bison had 272 yards on the ground.

Bussey led the Bison with 98 rushing yards of his own. It was a great, early career game for the redshirt freshman. Behind him, Domonic Gonnella and Kobe Johnson rushed for 82 and 62 yards respectively.

Noland spread the love in the passing game. Noland completed 10 of 15 for 135 yards. He hit 8 different receivers with his 10 passes. Braylon Henderson led in receiving yards for the Bison with his single 81-yard touchdown run.

The next game for the Bison will be this Saturday at home against Illinois State.