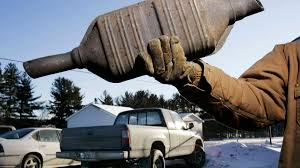 BISMARCK, N.D. — North Dakota lawmakers are weighing a bill aimed at cutting down on an epidemic of catalytic converter thefts.

The catalytic converters have become a hot item for thieves because of the precious metals inside. The devices, which have long been required to reduce pollutants from gasoline-powered vehicles, contain palladium, rhodium and platinum.

Those precious metals can bring thousands of dollars per ounce, and thieves find it easy to quickly cut the devices from a car’s underside.

The bill in the Legislature would restrict the sale and purchase of catalytic converters. Sponsoring Sen. Jordan Kannianen, a Republican from Stanley, tells the Bismarck Tribune that the thefts are a growing problem.

The bill would make it illegal for a core recycler — such as recyclers, junk dealers, valuable metal dealers and pawn shops — to purchase a catalytic converter that’s not attached to a vehicle unless the recycler is a parts dealer or auto repair company. Some exceptions apply if the seller has proper documentation of ownership. Violators would face an infraction punishable by a $1,000 fine for a first offense and a more serious misdemeanor charge on subsequent offenses.

Kannianen says the only way to go after the problem is to impose a penalty on buyers.

The Senate passed the bill unanimously earlier this month and it now goes to the House.