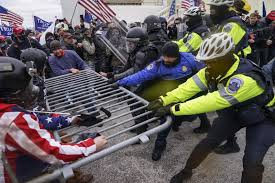 ST. PETERSBURG, Fla. — Two more Florida men have been charged by federal authorities for taking part in the January insurrection at the U.S. Capitol.

Court records show Paul Allard Hodgkins, 38, and Graydon Young, 54, are charged with entering a restricted building or grounds and tampering with or destroying records and documents on Jan. 6.

Hodgkins faces charges of violent entry and disorderly conduct on Capitol grounds, and Young is charged with conspiracy to defraud the United States and destroying, altering or falsifying records in a federal investigation.

A federal criminal complaint says that Hodgkins was identified by a person who knows him from a selfie photograph taken inside the Senate chamber. Hodgkins is pictured with a beard and mustache, long black hair, and a t-shirt with the logo “Trump,” referring to former President Donald Trump.

According to the complaint, Hodgkins spoke with authorities a few weeks after the riot and said this: “According to Hodgkins, he saw other people around him breaking windows, individuals engaged in a knife fight, and other injured individuals, but Hodgkins did not know those individuals or participate in the conduct.”

Court records show Hodgkins was released on $25,000 bail. The case, like all the others, is being prosecuted in Washington, where both men will be transferred.

The complaint against Young was not available via court records on Friday. He has a preliminary and bail hearing set for Monday before a federal magistrate judge in Tampa.

Biden to slowly allow 25,000 people seeking asylum into US